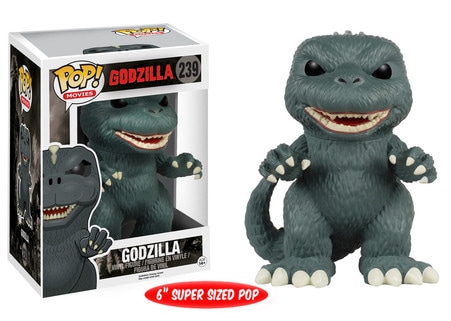 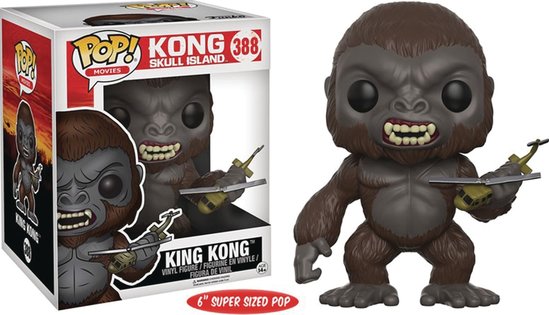 This 6" tall super-sized Kong POP! will tower over the rest of your collection! Collect the mighty Kong before the upcoming film, Kong: Skull Island hits theaters this March! Window box packaging. It is being released Feb 2017.

To celebrate the release of Godzilla Vs. Kong Funko is releasing several POP! figures. Included are two 10 inch POP!s (Jumbo), one of Godzilla and one of Kong; six 4.5 inch POP!s, Godzilla closed mouth and an Atomic Breath version, Kong with Battle Axe, Battle Scarred, Angry versions and Mechagodzilla; and two keychain POP!s one of Godzilla, one of Kong. There will also be exclusives, City Lights versions of the 10 inch at Walmart, glow in the dark version of the 4.5 inch Atomic Breath version at FYE, a two pack of 4.5 inch at Books A Million (the regular versions of Godzilla and Kong 4.5 inch), flocked Kong with Battle Axe (4.5 inch) at Barnes and Noble and Books A Million, and a glow in the dark version of Mechagodzilla (4.5 inch) at Funko.com. There is also a three pack of Godzilla Atomic Breath version, Kong with Battle Axe, and Mechagodzilla at Books A Million.

This figure stands 4.25 inches tall, and will be released Oct 2021. There are two versions the regular and a glow in the dark version that is limited to approx. 1 in 6 out of a total of 12,500 figures. The figures are in soda cans ("blind" release, no soda is included) and come with a POG shaped collector card.

This figure stands 4.25 inches tall, and will be released Feb 2022. There are two versions the regular and a flocked version that is limited to approx. 1 in 6 out of a total of 12,500 figures. The figures are in soda cans ("blind" release, no soda is included) and come with a POG shaped collector card.

Godzilla was released as part of the Mystery Minis Blind Box: Science Fiction Series 2 that included numerous characters from Science Fiction. As the name implies it was random as to what figure one would get from the 15 different figures. 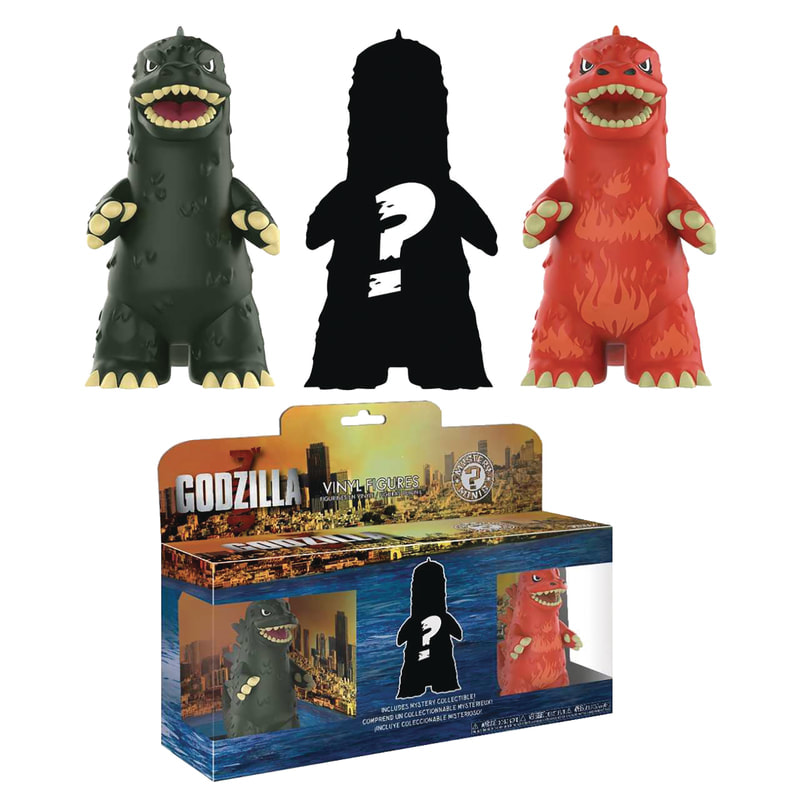 ​Godzilla is stomping into your collection! This Mystery Mini Godzilla 3 pack features two adorable Goji figures, plus a mystery variant color! Figures come packaged together in a window box package that's great for display. Releasing May 2018.

Hikari is a Funko line of Japanese sofubi figures, two versions of Godzilla were released clear(green) and Ghost Godzilla as a Toy Tokyo exclusive. These were released April 2016.

​The Godzilla toy was green with small eyes, a big back-of-the-head, a pronounced nose, a very short snout, broad shoulders, yellow claws, and a completely upright posture. It had a firing fist and flickering tongue. It was released in the late 1970's.

The Rodan toy was a crimson-red color, with a different red coloring on the horns and beak lined with small teeth, yellow eyes, a column of plates in its chest, a 38-inch wingspan with a "flying" gimmick, small legs and big feet with yellow claws. ​ It was released in the late 1970's.

Shogun Warriors Godzilla by Toynami was released July/August 2015. Made to replicate the original vintage Mattel design, the SHOGUN WARRIORS GODZILLA features flicking tongue action, rolling wheels under the feet, and a firing right fist. It stands 19 inches tall. The regular version had black skin, the SDCC Exclusive version had green skin. Both the claws and tongues were also different colors.

Crashing through a city near you is the new Massive Godzilla from JAKKS Pacific - the longest Godzilla figure on the market! He is over 43 inches in length (over 3.5 feet long) and 24 inches high. He has 12 points of articulation, a powerful swinging tail and his mouth opens and closes. Godzilla is highly detailed and will be a favorite of children and collectors alike. Get your Godzilla figure today and start wreaking havoc! This figure was released summer 2014. The same basic figure was re-released for Godzilla: King Of The Monsters with a new package, summer of 2019.